History of the BCJ

The Brown Classical Journal was founded in 1984 by Professor Alison Goddard Elliott, who nurtured the editors and contributors of that first volume as Faculty Editor. Sadly, the volume was dedicated to her memory. Susan Hueck Allen, then a graduate student, designed the logo for the journal, which was used for the first eleven volumes. The BCJ is published annually and typically is printed in the spring.

The purpose of the BCJ, as explained in the editorial statement of Volume 1, was "to encourage and to reward well written essays by students of the Classics at Brown University." From the beginning, the journal welcomed essays written for Classics courses, as well as poetry on classical themes and short translations. In his welcome to the BCJ, entitled "An Undergraduate Journal in Classics," Professor William F. Wyatt, the Chairman of the department at the time, goes on to challenge the students: 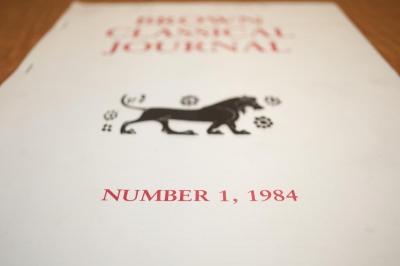 "The journal is on its way, and we should rejoice. But it will need help, and I urge all classicists, fledgling or experienced, to contribute papers, articles, poems and reflection to this new venture."

The following year, Professor Alan L. Boegehold became the Faculty Editor of the BCJ, and remained in that position until 1990. Volume 2 slightly changed the scope of the BCJ by expanding the guidelines for contributors. As of 1985, the journal would accept "works related to the Classics by Brown students; works by other contributors [were] also welcome." The other shift that occurred in the second volume was that, whereas the first volume contains only research papers, the second volume is filled also with a reflective essay, translations, original poetry, and original artwork. Volume 3, which was published in 1986, was dedicated to the memory of John Rowe Workman, Duncan Macmillan Professor of Classics Emeritus, who had died in 1985.

In 1987, Professor Boegehold and the student editors, decided to take stock of the endeavor in an Editorial Statement at the beginning of Volume 4, which follows:

With this fourth issue of the Brown Classical Journal, we, the editors, take a little space to review accomplishments, summarize our notions of what the journal is and can be, and extend a warm invitation to all students, poets, scholars, and artists to send in work they would like to see published. First, the title, Classical, a compendious word in any case, is used in the loosest possible way. That is, whatever topic is of interest in the Department of Classics at Brown University can be included in our offerings. As a result, we have published translations of Latin, Greek (both ancient and modern) and Sanskrit poetry. We have also published essays that interpret literature, historical studies, and parodies. We have accepted previously published poetry so long as theme or orientation--or indeed sometimes just an allusion or two--is classical. Our graphics as well are sometimes explicitly and obviously Roman or Greek in subject or treatment, or there may be no more than a feel of antiquity about them. Our contributors are students, both graduate and undergraduate, mostly from Brown, and faculty, again mostly from Brown but not exclusively. We have also published work by persons with no known academic affiliation.

Interestingly, there is a note in this issue, informing contributors that the editors "compose[d] a print-ready copy of the Journal on the mainframe at Brown University," and urging "would-be contributors who [had] access to a computer" to submit their work as a file. This note is a reminder that desktop computers were not always available and desktop publishing was in its infancy, which made these early issues much more a labor of love for those involved in it. Professor Boegehold continued to direct the journal as Faculty Editor through two more volumes, Volume 5 in 1988-89 and Volume 6 in 1989-90. Special thanks is owed to Professor Boegehold for obtaining an ISSN number for the journal through the National Serials Data Program of the Library of Congress in 1989. 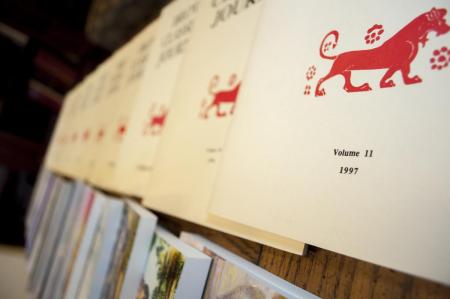 Professor Joseph Pucci became the Faculty Editor during the 1990-91 academic year. The BCJ continued with both graduate and undergraduate editors, and continued to accept submissions from Brown graduate and undergraduate students, as well as from students affiliated with other universities, and from faculty members of the Brown Classics Department. New volumes were published in 1991, 1992, 1993, and 1996 (Volumes 7-10 respectively). Additionally, a supplement to Volume 8 was published in 1992, entitled, "Teaching the Classics." Financial support for this supplement was provided by Peter Bokor, Brown '82, "as a token of gratitude for the education he was given by the Classics Department." The purpose of the supplement is best stated by Prof. Wyatt in his preface to the volume:

The papers in this volume were presented to faculty and students of the Department of Classics at Brown University during the Spring of 1991. They are gathered here in hopes that others may learn from, add to, and incorporate into their thinking about teaching, the conclusions and advice offered here.

He goes on to editorialize about his colleagues who contributed to the volume.

They are excellent teachers as well as fine scholars, but they do not follow one model of teaching, as will be seen from their presentations. They share a serious interest both in their students and in the material they present to those students. Beyond that their approaches are diverse, their styles are various, their personalities strikingly different.

In 1997, the management of the BCJ again shifted due to funding restrictions. For the first time, only undergraduates served on the editorial board and only undergraduate submissions were accepted for publication. These editors state the shift well:

After several years of dormancy, the Brown Classical Journal has returned. We are now funded by the Undergraduate Council of Students, and are dedicated to publishing solely undergraduate writings. We were tremendously pleased to have received so many submissions this year, all of the highest quality. This issue reflects the diversity of classical studies; our articles cover a range of subjects, from the Greek East to medieval religious lyric.

Unfortunately, the BCJ lost the support of the Undergraduate Council of Students, and was not published for two years.

In the fall of 1999, Prof. Pucci solicited a new group of editors for the BCJ and decided to pilot a non-credit workshop for the editors. The Classics Department decided to keep the Brown Classical Journal as an undergraduate publication, both for editorial duties and for submissions. This enthusiastic editorial board decided to change the format of the journal from the traditional 8.5" x 11" format to the new 6" x 9" format. The board also decided to revamp the cover, replacing the BCJ logo with original artwork. Thus, Volume 12 appeared in the spring of 2000, with perfect binding and a glossy white cover hailing deep blue artwork by Emily Marso. This was also the first volume to contain original photographs with classical themes taken by students. Volume 12 was funded by several sources, but most importantly the generosity of the Blaustein Foundation allowed for the new format. 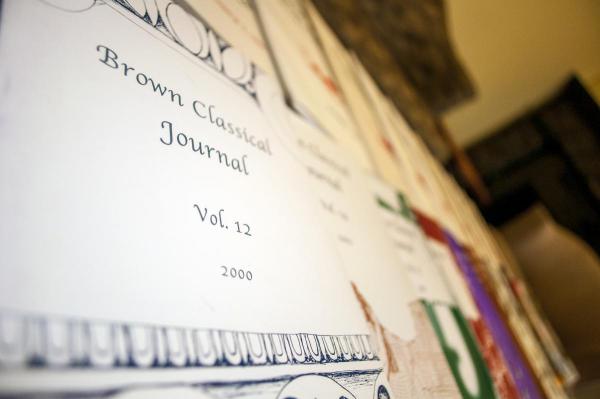 From 2000-2015, Professor Pucci and his wife Kitty ran monthly workshops for editors. Starting in the fall of 2015, student editors-in-chief assumed sole responsibility for the publication.

The journal is now entirely student run, at every phase of its conception and production while the department’s Director of Undergraduate Studies serves as the faculty advisor. The editorial board, under the direction of the student editors-in-chief, works diligently for months, putting out the call for papers, marketing the journal, reading and scoring submissions, copyediting accepted manuscripts, formatting and typesetting each volume, and distributing the volume to on- and off-campus friends of the Classics Department.