Classics Runs in Their Family 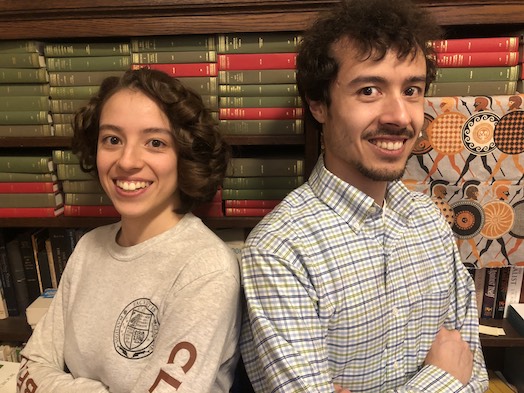 They say siblings are uncommon among Classics concentrators here at Brown - but then, we had an uncommon upbringing. We were both homeschooled through high school almost single-handedly by our father, who introduced us not only to ancient literature but to the languages in which it was written. We grew up surrounded by shelves and stacks of books, including a large and ever-growing collection of green and red Loeb Classical Library volumes. Thanks to Dad we came to appreciate how much the words and deeds of the ancients define who we are. It's really no coincidence that we both studied Classics at Brown. Still, we arrived at the Classics Department from rather different directions.

On the one hand, Ben came to Brown looking for an Sc.B. in either Computer Science or Physics, ultimately graduating with the former. As his first-year elective, he took Ancient Greek. The following year he couldn't decide whether to stick with Greek or pick up Latin, so he did both - at which point he realized it would be less work to just do a second concentration in Classics than to not do it. His two favorite Classics courses were Ancient Law, taught by Prof. Scafuro, and Funeral Orations, taught by Prof. Hanink.

On the other hand, Sylvia's first choice of concentration from the beginning was Greek and Latin. Along the way, she picked up a second concentration in Mathematics, and has been involved with running the math DUG for two years. She has contrived to take one Greek class in each of eight semesters, of which the first and last were taught by Prof. Kidd. She can't pick her favorite Classics classes, but among them are Republican Roman history with Prof. Mignone, Latin Love Elegy with Prof. DeBrohun, and The Greek Chorus with Prof. Haynes.

Ben, who graduated in 2012, now works for Brown's C.S. department's technical staff. Outside of work he gives piano recitals and posts music videos to his YouTube channel, "insearchofthemuses." In his few spare moments he still enjoys reading Homer, Thucydides, and Aristotle, but in translation. Nowadays anything he needs translated he throws at his sister.

Sylvia is wrapping up her Classics honors thesis - on inscribed citizenship oaths in Hellenistic Greece - under Prof. Oliver. She looks forward to beginning work as a paralegal after graduation, and she hopes to pick up some old hobbies and to continue reading Greek sometimes, regardless of whether the texts are being thrown at her.